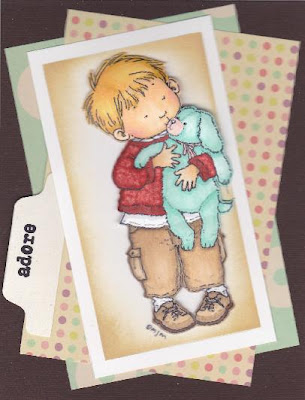 What a lovey image!  As you must know by now - Mo Manning is my favorite artist right now.  I keep finding digis that bring back such strong memories from my childhood.  I had a brother who had a blanket with a satin edge (oh, he is going to kill me!) - he would twist up the corner and stick it up his nose while he sucked his thumb.  Mom finally cut that blanket in quarters so she could keep 2 or three freshly washed while he carried around the fourth corner.  I don't remember that he even noticed the sudden reduction in size.
I printed out 2 copies of this digi - one for the base and one to color.  The top image was colored with Copics - I used the Blender pen to dab on the sweater to create texture.
I fancy cut the image and here is a new trick I tried - instead of cutting the image into pieces to layer, I only cut slits in two places.  I cut a slit between the head and the neck of the sweater up to the dog and the second between the shirt and the pants to the dog.  The image is sculpted from the back to round it and foam tape put in the center of each section I want raised.  When the image is attached to the base layer, I glue down the lower edge of the slit parts so the upper section remains raised above it.  Thus the boys ear and cheek are raised above the neck and the shirt is raised above his pant waist.
TIP:  The edges all around were carefully colored with the predominate color of each section (blue-green around the dog, brown around the pants edge, etc.) to make sure no white left from the cutting process shows.  Also, that same color is applied to the base image just around the edges so if you look at the card from the side you are not seeing any white - it all matches.  This really makes it look more professional and finished. 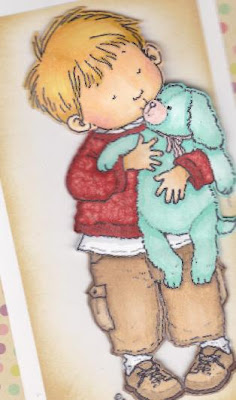 This card should be eligible for the following
CHALLENGES:
DP2 Challenge #133 - Anything Goes
Cute Card Thursday Challenge #215 - One for the Boys
Two Sisters' Challenge #90 - Anything Goes
IMAGES:  The focal image is Digital Pencil Too  by Mo Manning
PAPER:  Neenah Classic Crest Solar White 80# Cover Wt. used for the images; DP is from K & Company; base CS is Georgia Pacific
EMBELLISHMENTS: Tab is a punch and "Adore" is a self inking "Mini Word"
INKS: Distress Inks were used to create the faux frame; the image is printed on a Canon PIXMA & colored with Copics: