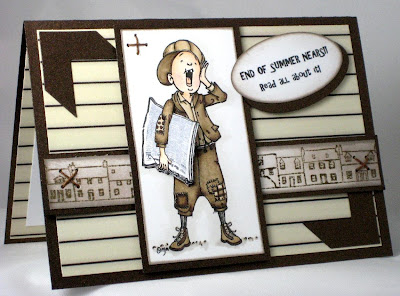 Another fave Mo Manning is this image called "Extra".  I was inspired by the DP2 Challenge theme: "Good Bye Summer" to make that the headline for this newsboy.  First step was a decision to use some papers I have been hoarding and make it a monochromatic card.

The top picture makes the base cardstock look dark brown but you can see from the close-up that it is a wonderful shiny copper.  That CS was used for the matting and the corner pieces.  In an attempt to make it look like the boy is on the street, I looked at stamping vintage cars for the background, but settled for the street scene border stamp that creates a "ribbon" behind the image.  I cut it down to the right length, matted it and attached it with two cross stitches using brown waxed linen used for bookbinding.  A third stitch was added in the upper left corner of the image panel.  The focal image was printed out three times and colored with Copics.  The boy's right arm and the newspapers were fussy cut out of two extra copies, sculpted to round them and attached to the original layer with foam tape.  This makes a stack of papers elevated away from his body that, unfortunately, is not reflected in this photo.  The sentiment is computer generated, punched and matted.  Both the image and sentiment panels' edges were inked with Distress Ink and elevated on foam tape for added dimension. 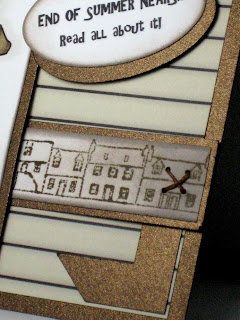 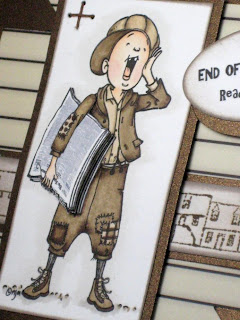 SUPPLIES
IMAGES:  The focal image is by Mo Manning at Digital Pencil Too; the row of houses border stamp is from Highlander Celtic Stamps; Sentiment is computer generated.
PAPER:  Neenah Classic Crest Solar White 80# Cover Wt. used for the images; DP and base CS are from my "can't bring myself to use it cuz then it will be gone forever" stash.
EMBELLISHMENTS: Corner chevrons are from a punch; brown twine is my bookbinding waxed linen.
INKS: "Pumice Stone" Distress Inks were used to ink the edges; the image was printed on a Canon PIXMA printer & colored with Copics:

May you color with abandon, create wildly and always make what amuses you!