Blast from the Past... 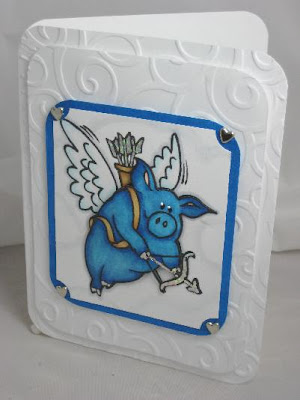 This week Craft Your Passion is asking us to use a challenge from the past - and I chose to do two cards.  For the first one I chose to use "Things With Wings" Challenge #89 from Dec.2011.  And when I found this image from DRS Designs named "Cupig", I was delighted!.
I know, I know... whimsical ain't it?!  I am using it for an anniversary card for my husband - the inside reads:

"And they said it would happen when pigs fly...
But look at us now - married 34 years!"
I made the bow and arrows all glitter with silver foil .  The base CS and the first layer have both been embossed using a Cuttlebug Embossing Folder.  That first layer has been elevated on double sided foam tape.  Silver, heart shaped brads are added to the image panels. 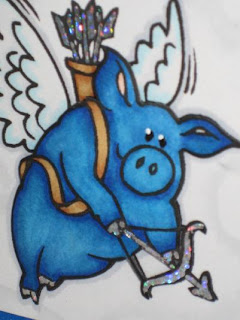 This card should be eligible for the following
CHALLENGES:
Crafty Sentiment - Male Card (husband's Anniversary)
Papertake Weekly - Anything Goes

IMAGES:  The focal image is "Things With Wings" from DRS Designs


PAPER:   Classic Crest Solar White 80# Cover Wt. used for the images; base CS is Georgia Pacific
EMBELLISHMENTS: Corners are rounded or punched with "Ticket Stub" by Making Memories Corner Chomper; Duo Glue and foil used on the bow and arrows.
INKS: the image was printed on a Canon PIXMA printer & colored with Copics:

And now for the 2nd card... I chose Challenge #76 - "Occupational Hazards" from Sept. 2011 and the image I chose is from Kenny K.  This whole thing is perfect for the pending swearing in for our daughter who is about to graduate from the Police Academy. 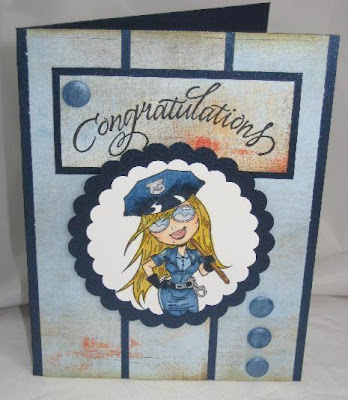 The background DP is Basic Grey and I used   Distress Ink on the edges of the three panels.
I colored the focal image and the Candi with Copics.

For those of you familiar with Kenny K, I did modify the image a bit to make it a little more modest - befitting my daughter's new job!  I colored in her legs (under the very short skirt) to make it look like slacks, and I drew a collar and buttons and colored in a blue blouse.  LOL!  I'm sure she will appreciate that! 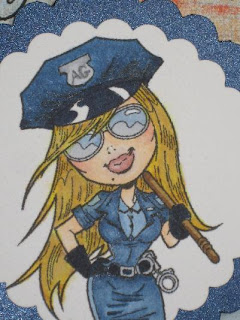 This card should be eligible for the following
CHALLENGES:
Basic Grey #75 - Punch It (2 Scalloped circles)
Sassy Cheryl #131 - Got the Blues?
Papertake Weekly - Anything Goes

IMAGES:  The focal image is "Hot Fuzz" from Kenny K; sentiment is from Penny Black
PAPER:   Classic Crest Solar White 80# Cover Wt. used for the images; DP by Basic Grey's "Oxford"; base CS is from stash
EMBELLISHMENTS:  Scalloped circles punched with Marvy punches; Candi was white and then colored with the same blue Copics used in the focal image.
INKS: the image was printed on a Canon PIXMA printer & colored with Copics: